I believe in Angels

so some random thoughts have gone through my brain this past week.


first off... I took Rhena and two of her friends to see the Charlotte Symphony's production of Cinderella this past weekend. that act alone brought up MANY thoughts.... one of which I am so happy to be done with two children. seriously.

fitting 3 car seats/boosters in the back of my car awakened the engineer in me, and being in a parking garage woke the acoustics specialists in Rhena and her two friends. holy good CRAP I had no idea three girls could be so loud. I mean.. WOW.

I learned that not all Cinderellas are created equal. period. and while I may have understood this notion starting several years ago when I would see different kids around the neighborhood dressed UP as Cinderella... (let's face it.. some girls need more than a fairy godmother to pull off the old Cinderelly getup) seeing my daughter see a production of the story done by a handful of actors and several puppets... well.. it's obvious that Cinderella can be different.

But this is good. I like knowing my child can be happy without a disney label slapped all over the place. the essence of the story clearly came through, and I did see the far-off-I-love-this-story-and-I-just-KNOW-some-day-my-dreams-will-come-true look in Rhena's eyes. That's magic. LOVE that magic.

What else. we met an usher named Rena. how cool is that? the woman was about equally gobsmacked when she heard me call to Rhena.... so much that she stopped me to ask if I just called her what she thought I called her. I would have loved to chat with her more.. but me and three girls ages 4-6 does not permit for much idle chat.

Oh.. here's one for you. the 6 year old of the group.. my neighbor's daughter??? she knows ABBA lyrics better than I do. and 'm not talking just that dumb assed Dancing Queen cause her momma forces her to listen to 80's crap music. I mean... there she was.... telling me to put on track 16 and 18 and specifically requesting "I had a Dream." I was impressed. like REALLY impressed. she'll get invited again, no doubt about that.


alright. time to get my motor running. lots to do!

Posted by Carrie at 8:42 AM 6 comments
Labels: rambles, Rhena

do you ever find yourself sitting back wondering "how the hell did THAT happen?"


sometimes mistakes happen, then time passes, and uh-oh... what was a teeny mistake a while ago turns into a hot mess of hurt feelings, unspoken anger and/or uncomfortable tension.


My kids in my CCD class made their first reconciliation last month, and when I was explaining the process to a neighbor, she commented on how horrific it sounds. I mean.. on one hand.. I totally agree... being 8 years old and telling some priest all the shit you've done wrong is NOT exactly one's idea of a good time. Much less being 30-hundred years old and fessing up to your wrong-doings.

But yet... what a process, huh? just taking pause, and saying "I'm sorry." and not "sorry.. but... whatever this and that reason"


So last year, I bitched and moaned to Kerrianne and Chris for 100 years about how I wanted a felt mustache. so Christmas cheer and glory... they sent it to me!


oh.. the plans I had!!!! I made about 1 1/2 dozen mustache cookies, and was going to wear the felt 'stache' while holding the PLATE of cookies... all while sporting my new chef coat that my parents gave me for my birthday.

then I lost the mustache. ugh. THEN... I never said anything. DUH! why NOT? I dunno. I really don't know. but now that i DIDN'T.. I feel like I'm walking around with this ELEPHANT of guilt. and the funny this is I'm out trying to do a bunch of good deeds for a bunch of OTHER people.. but still not addressing the two people I screwed up with. WTF is WRONG with me?!?!?


I should just take a lesson from my class.. oh wait.. the same lesson I've been teaching THEM (oh, the irony.. it's such a cruel cruel bitch...) and just say I'm sorry. and I was GOING TO.... but then I found the mustache!

so anyways..all's fine.. just apologize already, you dumb Polack! but now... I STILL procrastinate, and feel like I can make the apology BETTER by still sending the cookies... (though not the original batch. sadly, I never got around to taking that one picture... and between me, troy, and the kids.. cookies don't survive long in these parts. )

so this weekend, I'm hoping to just kind of whip up a batch of apology cookies, and hope the valentine's day aura of love helps them forgive me. if not for the initial losing of the stache... then hopefully for me just being so dumb and not being honest about what was going on.

SO to my favorite blogging couple in Oregon? I'm sorry. I'm so sorry. I really do feel like a dumbass for the way I let a simple mistake escalate into a THING, and I really hope y'all will accept the long-lost stache and my apology package.

speaking of cookies.. I'm hosting a valentine's contest over on the baking blog. super easy to win, so go on over....

Last night, in the kids' pre-bed dance party, Troy had taken the lead while I could stay downstairs for a few minutes to ensure that the gagillion shows we watch were going to be properly recorded.

When I came upstairs, Carol King was BLARING some Chicken Soup with Rice. To add to the ambiance, the lights were out,and the kids were flickering their $1 barnyard animal flashlights and busting moves like only white people can do. 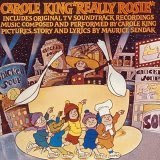 Maybe it's hormones, maybe it was just the end of a really long and crappy day... but something about hearing Carol King just made me tear up. I wouldn't have said the tears were from joy or sadness... but it truly was this escape of emotion as I just sat, watched, and allowed myself to BE.

I LOVED Really Rosie growing up. I STILL love that soundtrack. What I love even more is seeing Rhena and Danny totally JAM to it, too. I don't think they're at the age where they can really just dive IN to the music and pretend they're there on Avenue P... but maybe.


My folks had gotten me the nutshell library some time back. It's one of my favorite collections. TINY little things... but the memories! I love them. A few times a year, I'll sneak away to my closet and flip through the books. it's so hard to even begin to describe the connection I have with those books... you just have to take my word for it. but it's good.


If you're at ALL familiar with the Really Rosie characters or Maurice Sendak, grew up in the 70's in the NYC metro area, or just plain looking for something cool to share with your kids... then the nutshell library, the soundtrack, the book, and any and all of the associated stuff is just awesome. Though.. truth be told... those nutshell library books are NOT for toddler hands. at least not Danny's. he could probably EAT the damn books if he wanted. Yes.. I would have much rathered.. as a parent... to see them in board books.


and also? I picked up another one of Sendak's books, In the Night Kitchen, one time when we were in the bookstore a year or two ago. hmph. I'd forgotten just how very NAKED the main character, Mickey, gets. and how very DETAILED the illustrations are.


anyways... enough of my reminiscing. It was, is, and I hope will CONTINUE to be a good time sharing things from my childhood with the kids. kinda like when Rhena recently saw the Little Mermaid for the first time, and I was able to pretty much quote every line in the movie. She was looking at me like I was some CHAMPION GOD descendant with inside secrets of Disney. hah. little does she know. LITTLE does she know, I say! But back to my point. That Carol King. I'm telling you.... she gets me every time.