Well, I'd like to say I was too busy feeding homeless people and spreading good will towards mankind yesterday to post my thanksgiving thoughts, but the truth is that I was kinda busy stuffing my face and having a nice quiet day with my new family.


there's also plenty o' thanks I should be giving this year, so I best get to typing.

But now that I think about it--- this isn't exactly the first page of my new book where I list my acknowledgements. Not that I think all of my blessings don't deserve a big loud whup-whup... I just don't feel like getting all mushy on ya here.

Believe me--- I'm very thankful for the life I have and all of the amazing things I've experienced this past year. I'm grateful for my husband and child for the love and happiness they give me on a daily basis... and far more appreciative of my family and friends than I actually let them know.

Let's face it--- we already know that I'm no saint.... but I have been Blessed. I don't need a day on the calendar to know that, though. I mean--- every day is a new adventure. 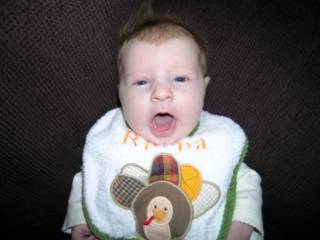 speaking of adventures.... I will give a written whup whup to those pilgrims.... now THOSE were some crazy mo-fo's! I was watching a show on PBS... that reality show where people went to live in some cold-ass town in Massachusetts and live like the pilgrims did... built their own houses, established crops... all that stuff.

I wonder if they realized just how much their lives sucked. I don't think they did.... 'cause they thought they were living BETTER lives than when they were in merry ole England. Plus, they didn't have all the cool stuff we have today, so to that effect, I guess they wouldn't know better.

I wonder if I would have been able to survive that lifestyle. I doubt it. I mean, I'm all for a weekend adventure here and there, but a few months on a BOAT???? then get to this crummy land with not even a MALL in sight? yeah--- I'm gonna go with no.

Troy and I play a game every now and then where we pick an era and wonder what our lives would be like if we lived during that time. we haven't discussed pilgrim time, but we've already established that during the Little House on the prairie days, I would either be a saloon girl or a fat old lady name Liza Mae running a brothel. Somehow even in make-believe I don't mesh well with tendin' to the crops.

During prohibition, I'd have been a flapper girl.... during the 40's I'd be a dancehall girl or working in a casino..... Notice the trend? ...not exactly pilgrim-esque, if ya know what I mean. I suppose a few years later I could have been a witch in Salem, or some Hester Prinn-type.... but the pilgrim thing just doesn't line up.


I DO cook a mean turkey, though.... well, NOW I do, anyways--- (first thanksgiving ---and TURKEY, for that matter--- I ever cooked was the year I got engaged to Troy. Turkey looked FABULOUS on the outside, but more like a new sushi dish on the inside.... at least the mashed potatoes were good that year!) I suppose that should at least count for something, no?

So anyways---- my hats off to those who have struggled so I don't have to. Past and present, dead and alive.... I know you're out there.... so thanks.

The Shots Heard 'round the World

I suppose it went well, once you get past the glass-shattering-10-minute-long-blood-curdling-I'm-serious-when-I-say-people-in-California-could-have-heard scream fest.

But like I said, after about ten minutes I was fine again.


nah--- I really didn't scream that long, but I did choke back a couple of tears while I watched my poor child look at me in horror as I held her hand and let a stranger stab her three times.

Actually, now that we're home, and she's gagging on the infant's tylenol I'm trying to give her for lingering pain... as I look back... it's kinda funny how red her entire head got while she screamed what was surely curses in infant-speak. I give her credit... when she's pissed, she puts her whole self into it. she's going to make a good wife someday--- I can just tell. well, that, or a drill sergeant. ... either one will work.

but yeah... today was tough.

She seems to be happy now, though.... her band-aid covered legs are kicking along to the music we're listening to. I'm more concerned how she'll fare over the next few days. --- I've heard that a lot of kids get sick after getting their shots.

I know at SOME point I'm going to have to deal with her getting sick, but her getting sick for the first time AND me trying to cook a turkey happening in the same week would just kinda suck in my opinion. --- Me thinking it would suck pretty much guarantees it'll happen, but you never know. ...Maybe God will throw us a curveball and have ME get sick instead.

Speaking of God.... we got the kid on Team Catholic last weekend. She's now officially open to getting guilt trips from anyone...

Kidding aside, though--- it was a nice day. As the priest poured the Holy Water over her head, I surrounded her with the same joyful hopes of what the future will bring that I fealt on our wedding day just a little over a year ago in the same church.

I looked out at the family and friends who joined us to witness our baby girl being received into the Church, and could sense the love they were so freely giving to a child many had just layed eyes on. What a beautiful feeling.

Like I said... it was a nice day. Unlike TODAY, which was a day I would have rather skipped in the parenthood 101 class. But in the end, it's all good. ...She won't remember a thing about these shots when she's older, and I learned that while she may not LOOK like me, she's just like me in that she hates cherry flavored liquid tylenol. ...I knew I liked this kid for a reason!

This can't be good 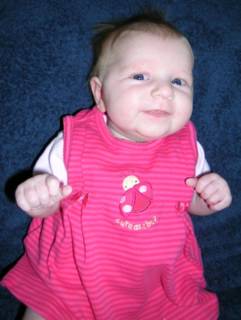 I have begun my quest for ruling the world.

This is even better than fried chicken.....

ah, yes... another week down. My little booger is 7 weeks old today. crazy! the whole 'mom' thing still hasn't fully set in for me yet, but I suppose 7 weeks in the grand scheme of things is pretty much nothing, so I'm not sweating it.


I'm sure I'll feel like a mom the first time she dents my car just by 'washing' it for me.


but things are good. We're heading to jersey next week, and I'm very excited about this. excited... but also pretty nervous.

Am I REALLY ready to travel with a baby? Hell-- I have problems remembering to pack all of MY things..... so much for traveling without checking bags anymore.... I mean... this is no quick trip to the mall, people..... we're going ACROSS THE COUNTRY!!!!

I can't help but wonder (read 'worry') about how she'll do on the plane. will the cabin pressure affect her? will the re-circulated air make her sick? how is the time change going to affect her?


She's a tough cookie, that's for sure, so I'm sure she'll be fine... but I am still just a little unnerved about the pending trip. I guess it'll be cool cause we get to board the plane first... and at least on the way there we don't have to change planes.

We have a layover in vegas.... but our little rebel has already been kicked out of a casino, so that pretty much cuts any fun time for mommy and daddy during those 2 hours.... Not sure I want her to see too much of vegas, anyway. I know what *I've* done in vegas... I can only imagine what TROY has done.....

let's just say Rhena is NEVER allowed to go to vegas unsupervised. EVER.


But I'm not worried about that yet... last I heard from Troy, she's not allowed to leave the house til she's 30.

when the saints come a' marchin....

well--- for those of you Catholic Fans out there... it's All Saints Day.

I haven't given much thought to Saints since my Confirmation, except maybe a few times along the way. There's a shitload of them, though. So many, in fact, that the Saint of the Day website has more than one listed for each day.


While I find this entirely comforting to know that there have been so many people that were so damn good in their lives that they were named to be Saints... it also makes me feel so ashamed that I am NOWHERE near being a fraction of what these folks were. But--- SOMEBODY has to make other people look good.....

In essence, Saints wouldn't be who they were if it weren't for people like me. So... on All Saints' Day.... I'll give my props to the peeps who done good.... but I'll also, in my most unable-to-EVER-be-a-saint-way..... pat myself on the back for helping them get to where they are.